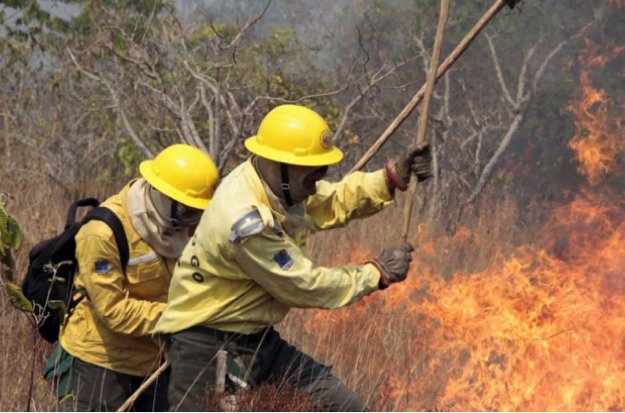 The pandemic led to delays in fire prevention measures after fire season began; indigenous volunteer firefighters say their is a culture of neglect

Age-old Indigenous knowledge has guided the sustainable management of wilderness areas around the world: how to preserve the land, anticipating what will happen throughout the year, and adapting to how nature and fire behave. Arson and climate change, however, have imposed a new scenario on the native peoples of Brazil, leading them to organize to prevent and combat fires that now systematically raze biomes of global importance such as the Amazon, the Cerrado and the Pantanal.

The Federal Brigades Program was created in 2013 by IBAMA and Funai, the national agencies for environmental protection and Indigenous affairs, respectively. It’s a fire management initiative that fuses traditional Indigenous knowledge with technical and financial support from the two agencies.

The aim is to prevent fires flaring up during the dry season, and fight them when they do occur. This year, there are 41 brigades operating across the country under this program, with more than 1,000 Indigenous members, according to Funai data.

However, budget cuts and delays in their scheduled activities — due to institutional disorder and the COVID-19 pandemic, as well as the anti-Indigenous policies of President Jair Bolsonaro — have frustrated their progress and worsened the fire situation this season.

That’s the conclusion of various sources Mongabay spoke to, many of whom requested anonymity for fear of reprisals or sanctions. During the reporting of this story, the head of Prevfogo, the IBAMA department in charge of the program, was replaced after five years in office.

The brigades’ very continuity is at risk, even as the occurrence of fires spreads across Brazil, raising concern and pressure for change from both within the country and abroad.