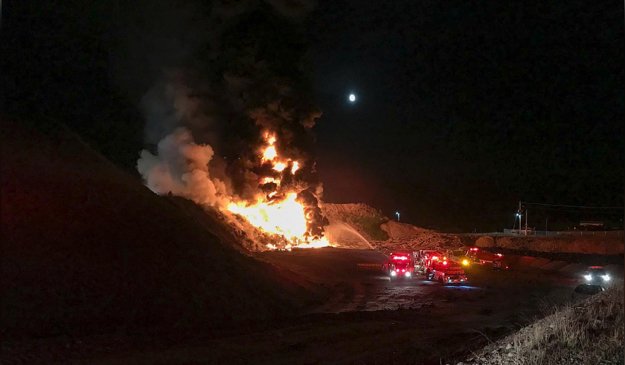 Ronan Fire Chief Chase Adler is not a man to brag. After every incident, he and his fellow firefighters discuss what went wrong and what needs improvement when they respond to the next emergency.

But Sunday’s fire at Tire Depot just north of Pablo came off without a hitch. With 16 fire apparatus, six fire departments, seven dump trucks, a dozer, and a front-end loader all working together, and an ambulance crew standing by, the 1 a.m. blaze was mostly wrapped up in time for workers to make it to Mother’s Day brunch.

“We just worked in unison,” Adler said after a meeting of the Lake County Fire Association, which included fire chiefs from throughout the county. “We couldn’t figure out anything to fix.”

Part of the success has to do with practice: this was the third flare-up some of the firefighters had been to at the recycled tire pile over a period of nearly two decades. A lot more credit goes to the extensive training the volunteers take.

But most of all, said Adler, “It wouldn’t work if these [volunteer] people weren’t willing to get out of bed and help us. Besides Ronan, mutual aid was provided by Charlo, St. Ignatius, Finley Point/Yellow Bay, and Polson Rural and City fire departments.