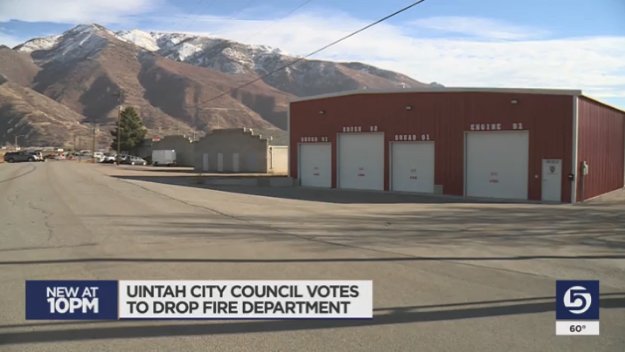 The Uintah Fire Department is on its way out after city officials voted unanimously to request annexation into the Weber Fire District Tuesday, likely bringing an end to 49 years of service for the volunteer fire crew.

“We want to do what’s best for the citizens of Uintah,” said Uintah Mayor Gordon Cutler.

The small town has a population of just over 1,3000 people. Of the 12 current volunteer firefighters, just one lives within the boundaries of the city.

“Can we sustain a full-time fire department with that population?” Cutler asked.

On Tuesday, he sided with the city council in voting to pass a resolution to request annexation into the Weber Fire District. It was a disappointing end for the volunteer crew.

“Tensions have been a little bit high on both sides. But we’re both trying to press forward and do what’s right,” said Marc Sacco, current Fire Marshal and the former fire chief of the Uintah Fire Department.

“There are a lot of folks that are very emotional about it,” said Don Pearson, a former councilmember and volunteer at the fire station.”

“But on the other hand, we’re not finding a lot of folks that are stepping up and saying, ‘OK, I’ll volunteer,’” he said.