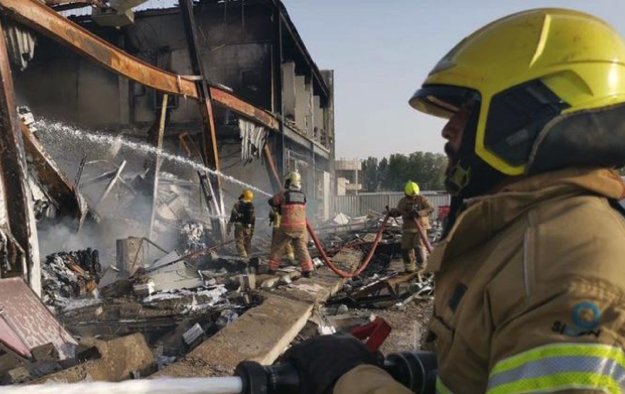 The front wall of the warehouse came down 16 minutes after firefighters arrived on scene; Saleh had 25 years of firefighting service

The family and colleagues of a firefighter who died while putting out a blaze in the emirate on Tuesday have paid tribute to a “committed and dedicated” man who cared deeply about protecting people.

Maj Gen Rashid Al Matrooshi, director general of Dubai’s Civil Defence, offered his condolences to the family of Sgt Adel Nasser Saleh, who died after a burning warehouse collapsed on him.

Sgt Saleh had been at the site in Dubai Investments Park with firefighting teams from three stations after flames engulfed two warehouses.

“He worked for 25 years with the civil defence and was known for his dedication in all the fire centres he moved between during his service, the last of which was the Dubai Investments Park centre,” said Maj Gen Al Matrooshi.

“He died when a wall suddenly collapsed from two floors above and fell on him while the teams were battling the blaze.”

He said Sgt Saleh, 44, was also known for answering the call of duty even outside his working hours and was loved and respected by his colleagues.

Sgt Saleh is survived by four sons and a daughter. His eldest, Saif, is 14.

“Before he would leave for work he would often hold my face and say ‘If I were to die in an accident, I would have died helping people’,” Saif told Dubai TV. He was proud of his father, he added.