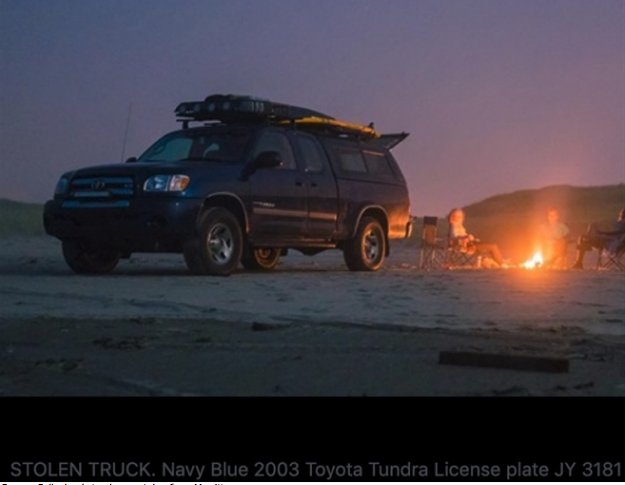 When Connor Callaghan was deployed by BC Wildfire to Christie Mountain Tuesday, he was among dozens of others who left his truck in a Merritt parking lot and headed toward the flames.

“We fought all night, slept and then worked again,” Callaghan said.

“I was done on Friday, so I got driven back to Merritt after working all night.”

That’s when he realized his truck, a navy blue 2003 Toyota Tundra with the licence plate JY 3181 had been stolen.

“I live in that vehicle in the summers while fighting wildfires, so all my belongings were in it including my laptop, iPad and school bag that I needed for my last year at university, starting in September,” he said, adding his bike rack was also missing.

It’s a big loss for the Kelowna university student and one he’s hoping getting the message out about what happened will help him get his property back.

“I looked at the security camera and (the truck) was taken at 2:45 a.m.” he said, adding later that the footage shows that it took about 20 minutes for the crooks to break into the truck, get it started and drive away.