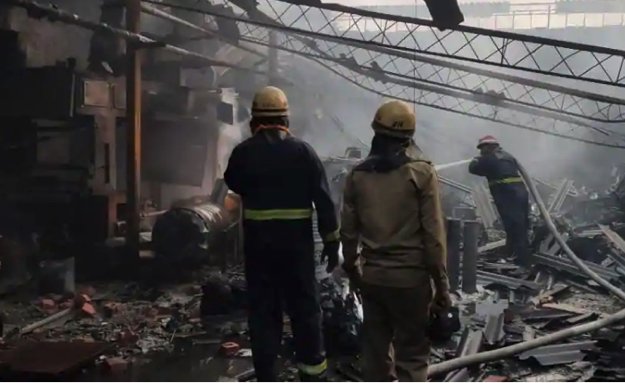 A major fire broke out at plastic manufacturing unit in Focal Point, Phase 6, here on Thursday night. While no casualty was reported from the spot, the building and machinery were gutted as around two dozen thinner drums exploded inside the factory.

Ten fire tenders along with 40 firefighters were deputed for the fire-fighting operation that continued for 8 hours. The fire brigade had received an alert about the blaze at 11.30pm on Thursday and the teams returned after dousing the flames around 8am on Friday. The reason behind the fire is unknown.

As per the firefighters, a huge stock of thinner and plastic was stored within the unit and it was difficult to enter the premises due to smoke. Single entry point to the building and thinner drum explosions also created problems in the operation.

Officials said the owner had failed to maintain proper fire safety arrangements and the fire tenders had to be refilled from nearby factories. Ten fire tenders were refilled for around 10 times each during the operation, they added.

Sub-fire officer Atish Rai said, “It took more time to douse the flames as there was only one entry-exit to the building. Sheds installed at the unit collapsed after the fire broke out. The fire was put out from the roofs of adjoining buildings. No casualty or injury was reported from the spot. Foam solution was also used to quell the flames.”