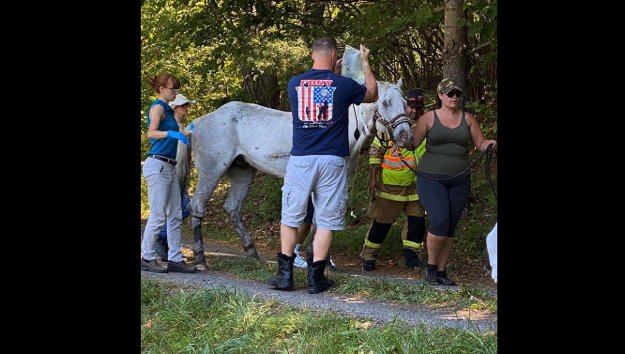 A blind horse made a failed bid for independence on July 4, bolting from a barn late Saturday before getting stuck in a pond until rescuers arrived Sunday morning.

The horse’s handler noticed the animal had gone missing and called the Fredon Volunteer Fire Company at 8:21 a.m. Sunday.

The handler guessed that the horse had escaped from its barn around 10 or 11 p.m. the night before and was trapped in the water overnight.

Upon arrival, firefighters assisted the handler in holding the horse’s head above the water until other emergency personnel got to the scene, Fire Chief Peter DePalma said.

One member of the department, equipped with a dive suit, got into the water and placed equipment around the horse to hoist it out of the pond.

The horse suffered “general lacerations” during its ordeal in addition to exhaustion and dehydration, DePalma said. Despite some injuries that will require further care, the animal is expected to make a full recovery.