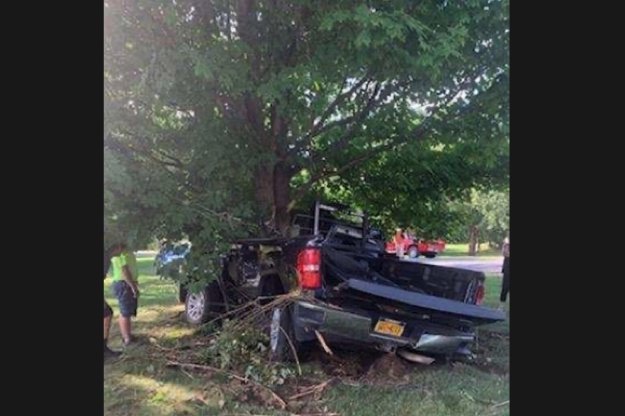 Doctors told the Upstate New York Volunteer that had he not lost 80 pounds over the past few months, he would not have survived the crash

Ann Jerome got to see her son for a brief moment before he was flown to Syracuse with injuries critical enough to make his survival expectancy unclear. She was able to touch his hand, then hear him say he was sorry.

It was around 4 p.m. on Tuesday when the Parishville Volunteer Fire Department was dispatched to a scene where a person was having difficulty breathing. Nicholas D. Jerome, a 30-year-old assistant chief and EMT who has been with the Parishville department for 12 years, was driving his truck to the fire station before heading out on the call.

On his way, his emergency lights activated, Mr. Jerome was approaching an intersection on Catherine Street when a vehicle began crossing. He swerved to avoid the vehicle and lost control, exiting the right side of the road and striking a telephone pole before crashing into a tree on the driver’s side. Witnesses later said there was a person mowing a lawn that he also avoided. Mr. Jerome would later say he never lost consciousness.

The ambulance crew he usually works with drove on the crash scene while they were on their way to the original call. They got him out of the truck and transported him to Canton-Potsdam Hospital, where he had surgery to control the bleeding in his stomach. His mother knew that there was a serious possibility that he wouldn’t make it.

“I couldn’t give up,” Mr. Jerome later said from a hospital bed. “This is what I do. I’ll get better so I can help people again.”