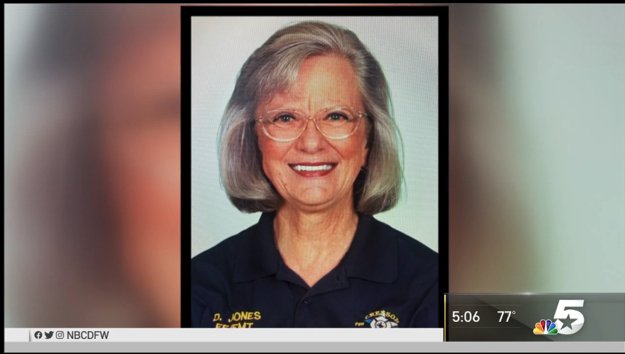 Fire Chief: Diana Jones, 63, was a dedicated firefighter and EMT who loved helping other people

A Texas volunteer firefighter has been killed while helping battle the August Complex fires burning in the Mendocino National Forest.

The deceased firefighter was identified by the Cresson department as a female who had volunteered to work at a western wildfire but the U.S. Forest Service confirmed that one person was killed and another injured Monday while battling the August Complex fire which has burned more than 236,000 acres in the Mendocino National Forest since Aug. 17.

Firefighter Diana Jones was as an EMT and volunteer firefighter. She had been with the Cresson Volunteer Fire Department for more than 5 years. Cresson is about 25 miles southwest of Fort Worth, Texas, CBS reports.

The firefighters were working on the Tatham Fire within the August Complex, when the vehicle accident occurred, according to Forest Service officials.

A second injured firefighter is receiving medical attention for burns to their hand and arm, while the third firefighter involved received no injuries.

“This was a tragic incident and our hearts go out to the family, friends, and colleagues of the fallen firefighter,” said Acting Forest Supervisor, Sandra Moore. “Right now, we are committed to providing support to those involved, while safely continuing firefighting operations.”