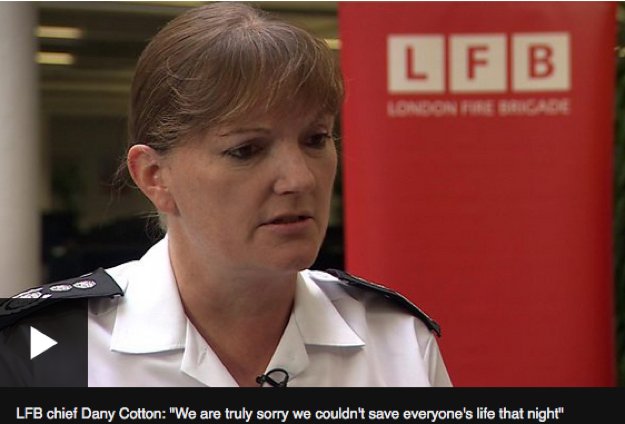 The first of a two-phase report looking at the June 2017 apartment building that killed 72 people was released today. The flammable exterior cladding that was added during a 2016 remodel and lack of sprinklers are largely to blame for the loss of life.

However the report criticizes the London Fire Brigade for having systemic failures that include errors by dispatchers, incident commanders and the Brigade’s of preparation.

Here’s a look at how the local media outlets are covering the report’s release and the full report.

Survivors and bereaved of the Grenfell Tower fire have called for the commissioner of the London fire brigade (LFB) to resign following a damning public inquiry report into the disaster that found “systemic failings” in her organisation.

They said it was “heartbreaking” to read that more of their loved ones could have been saved if the building was evacuated earlier and said Dany Cotton, the country’s most senior firefighter, should now quit.

“Her position is untenable,” said Natasha Elcock, chair of Grenfell United (GU), the survivors and bereaved group. “She is the commissioner, she is in charge and she didn’t make sure her team were trained. This wasn’t unprecedented. We have had fires before, but they just weren’t ready.”

Nazanin Aghlani, who lost two family members in the blaze, said leaders of the LFB should also be prosecuted.

“I’m not saying individual firemen, they do a hard job … but the seniors at the top get good money to do a very serious job.”

The brigade’s commissioner Dany Cotton, who is due to retire in April 2020, expressed her “deepest sorrow” that firefighters had not been able to save those who died, but said the inquiry had no expert evidence to support its conclusion about evacuating the tower.

It would not have been possible or safe to evacuate residents through a “narrow, smoke-clogged stairwell” with the number of firefighters who would have been available for that task said Matt Wrack, general secretary of the Fire Brigades Union.

The report also concluded that cladding surrounding the tower did not comply with building regulations and was the main reason for the fire’s “shocking” spread.

“Lives are at risk and the government need to treat this as a national emergency,” the group said.

The inquiry made 46 recommendations, including improvements in training for fire brigade staff and the development of national guidelines for evacuating high-rise buildings.

The next stage of the inquiry will consider whether London Fire Brigade is even “capable of learning from its mistakes,” Sir Martin says.

He concludes that the firefighters’ rescue efforts were hampered by “woefully inadequate” knowledge of the building, while their lack of preparation was so “inexcusable” that commanders at the scene did not even know how many floors were within the tower.

There was no contingency plan for an evacuation, he reveals, while firefighters had received no training on the dangers caused by combustible cladding.

Junior firefighters who arrived at the scene were “faced with a situation for which they had not been properly prepared.”

“They neither truly seized control of the situation nor were able to change strategy.”