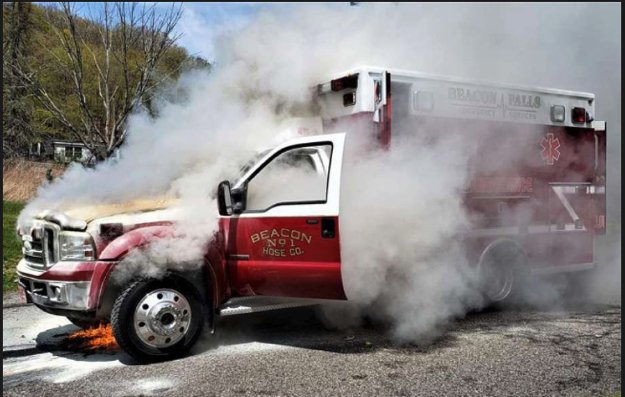 One of Beacon Hose Co. No. 1’s two ambulances caught fire Monday afternoon as EMTs were taking a patient to Waterbury Hospital. EMTs responded to a home Blackberry Hill Road at 1:37 p.m. for a person having a breathing problem, said Beacon Hose Public Information Officer Jeremy Rodorigo, who is also a firefighter and EMT.

As the EMTs — Patty Crossley and Gretchen Carlson — drove the patient to the hospital, Beacon Hose Chief Brian DeGeorge said smoke started coming from the hood and filling the ambulance cab. The crew stopped the ambulance on Blackberry Hill Road and got the patient to safety, Rodorigo said. The EMTs called for another ambulance and reported the fire at 2:12 p.m., he said. The EMTs, who Rodorigo said acted quickly and properly, cared for the patient until the second ambulance arrived on the scene to take her to the hospital.

“The crew that went out on the call did a great job of getting the patient out of harm’s way,” Rodorigo said.

“I’m impressed with the crew. They did a phenomenal job,” DeGeorge said.

As for the ambulance, DeGeorge said first responders who got to the scene before a fire engine used fire extinguishers to help keep the blaze under control and removed equipment, including oxygen tanks, from the back of the ambulance.

Firefighters put out the fire in about 10 minutes after prying the hood open, Rodorigo said.

No injuries were reported from the fire.

DeGeorge, who is also the town’s fire marshal, said the fire started in the engine compartment. The cause is under investigation, he said.

The fire left the volunteer company with only one ambulance, but Beacon Hose won’t have to wait too long for a new one.

The ambulance that caught fire — a 2006 Lifeline Ford — was going to be replaced this fiscal year. DeGeorge expects the new ambulance, which was already ordered, to arrive in about a month or so.

The town was planning to sell the ambulance or trade it in, but officials will now file an insurance claim instead.

DeGeorge said officials are looking into whether they can borrow an ambulance from another town until the new one is in service. For now, the department will use the one ambulance left and rely on mutual aid from surrounding towns.