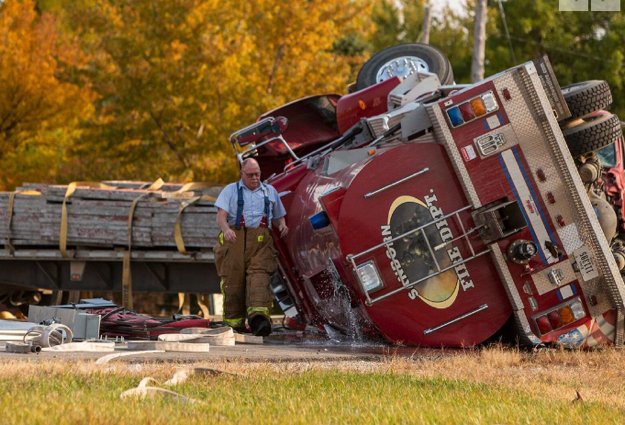 A collision Thursday, Oct. 8, in Sanborn hospitalized the drivers of a Sanborn Fire & Rescue water tanker and tractor-trailer belonging to B&M Concrete of Hull.

The crash happened at about 4:15 p.m. at the west intersection of highway 18 and 59 as the 3,500-gallon tanker was en route to a combine fire about a mile and a half northeast of Sanborn.

Sanborn fire chief Randy Lyman said his was the only fire department that was responding to the fire at first and that a quick-attack pumper had gone on ahead of the tanker.

“The tanker was going through the intersection before the quick-attack and it got hit, so then with the accident, we called Melvin to respond with Primghar being out of service,” Lyman said.

Primghar Volunteer Fire & Rescue was responding to a separate fire at the time.

The quick-attack pumper was able to get the fire under control and therefore called off the assistance from the Melvin Fire Department.

The driver of the tanker was released from hospitalization at about 8 p.m. Thursday.