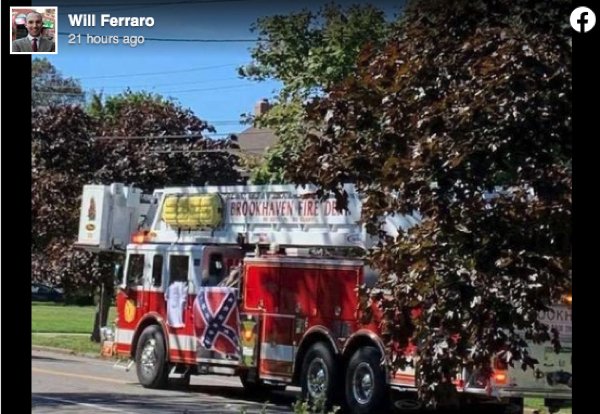 The department says one firefighter acted alone, hanging the flag on a rig used in a parade for a firefighter battling cancer

One day after Brookhaven Fire Department officials apologized amid the uproar caused by a viral social media post showing a Confederate flag draped on the side of a department fire truck, Suffolk County Executive Steve Bellone issued a statement saying he was “deeply disturbed and angered” to learn of the incident.

The social media post, a photograph of that ladder truck decorated with a Confederate flag, went viral on Sunday and led Chief of Department Peter Di Pinto Jr. to apologize to the community, EMS workers and firefighters for the flag — once the symbol of the slaveholding Confederate States of America during the Civil War — that was draped on the side of the fire truck.

“This afternoon the chiefs and commissioners of the Brookhaven Fire Department and the Brookhaven Fire District were made aware of an incident involving one of our vehicles,” Di Pinto Jr. said in a letter posted on Facebook. “The unauthorized action was done without the knowledge of the leadership team and is condemned in the strongest terms.

“The strength of our community has always been its diversity and our department has always sought to be inclusive,” Di Pinto added. “We can assure our community that ‘Racism has no place in our Firehouse.’ ”