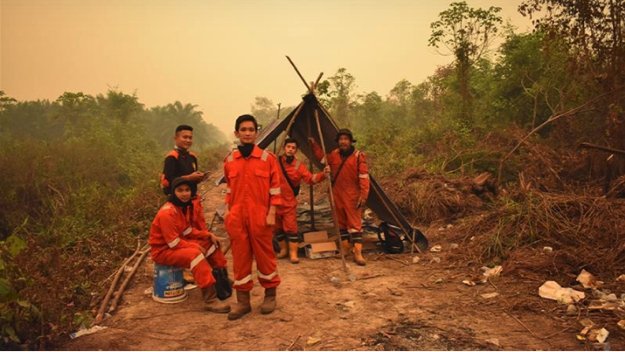 Agus Setio Pembudi has been working as a volunteer firefighter for almost two months, trying to quell vicious forest fires that have ravaged parts of Indonesia including the islands of Sumatra and Kalimantan since July.

Last week, he almost paid for it with his life.

“I’d been out in the fields since the morning and the water pump I was using ran out of petrol (to power it),” Pembudi, a local farmer told Al Jazeera. “Without any water, I couldn’t keep the smoke away and I couldn’t get enough oxygen. I started shouting to my team. I don’t remember anything after that.”

Pembudi collapsed in the middle of the burning forest and was only saved because other volunteers heard his cries for help.

“I heard him screaming, but I couldn’t see him through the haze,” said Pastor Polke Pelle, another volunteer firefighter in the village of Catur Rahayu in Jambi, Sumatra.