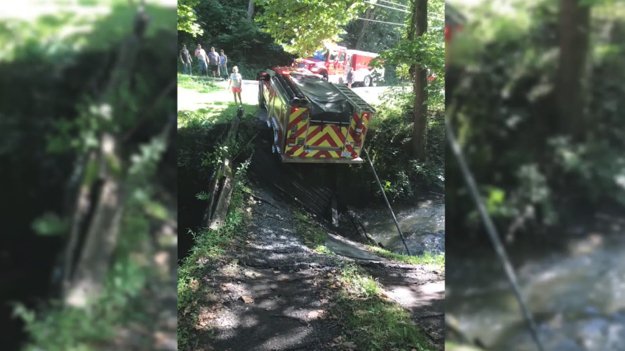 No firefighters were injured, but the mini pumper’s undercarriage was damaged beyond repair

At the end of August, the Rhodell Volunteer Fire Department went out for a routine hydrant inspection. Their last stop of the day brought them to a bridge older than some of the firefighters.

Michael Holshouser, fire and EMS coordinator for the fire department, said at the time, the firefighters did not see any cautionary signage or reason to not drive their mini pump engine over the bride; however on the way back, the bridge collapsed.

“Oh my when I realized what had happened, I’m like, you see those movies where you are teetering on the bridge and you’re like do I get out or do I sit,” Holshouser explained.

Holshouser began working with the fire department 12 years ago. He said he has driven the same truck over the same bridge year after year.

While hindsight is 20/20, Holshouser said this was going to happen eventually. A pre-school bus normally drives over the bridge and he said he is thankful the accident happened when it did.

“And we are glad that it was us. We can take the hit on our equipment you know, and nobody got hurt so as far as people and things go, stuff can be replaced, people can’t and we are lucky that we were all okay,” said Holshouser.