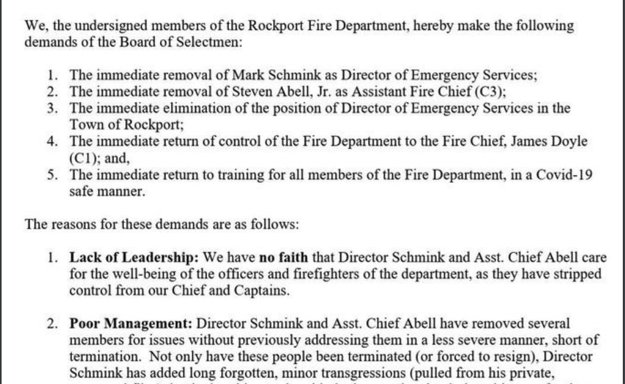 Volunteer Firefighters Threaten to Quit if Leaders not Removed

The Mass. department says most of its members will quit if control is not turned back over to the fire chief

A majority of Rockport’s all-volunteer Fire Department are threatening to quit unless the town removes Mark Schmink as director of emergency services and Steven Abell Jr. as assistant fire chief.

Capt. Frank Favaloro of Rockport’s Pigeon Cove fire company sent a letter to selectmen Monday demanding the “return of control of the Fire Department to the Fire Chief, James Doyle.” This includes ending Schmink’s and Abell’s oversight of the department, reinstating complete control to Doyle and reinstating training “for all members of the Fire Department in a COVID-19 safe manner.” If their demands aren’t met by Friday, Nov. 13, at 6 p.m., most members of the fire department, including Doyle and Assistant Chief Kirk Keating, will stop working, according to the letter.

“It’s pretty unanimous that everyone is going to walk,” Favaloro said in an interview, “except for assistant chief and a couple others who are afraid for their jobs.”

“We just felt we’re being bullied by the director,” he said. “We’ve been complaining about the treatment since February. (Schmink)’s taking complete control of the fire department.”