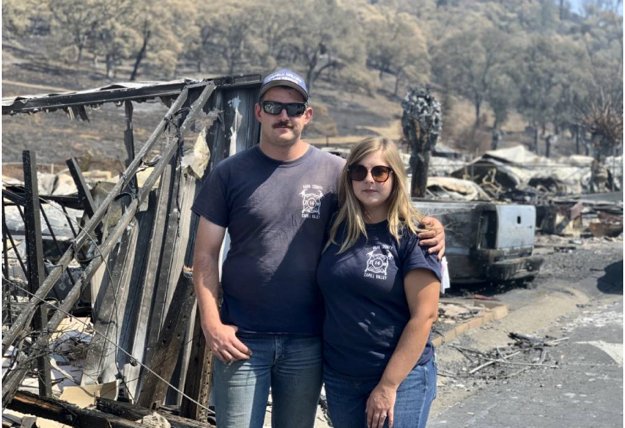 He carried the engagement ring to keep it from getting lost to the fire, then popped the question early to “cheer her up” after both lost their childhood homes

Brandon North stepped onto a concrete slab and kicked up a warped piece of metal with the toe of his boot. A cloud of ash settled into the 7-year-old imprint of his younger brother’s tiny feet etched into a crumbling concrete walkway.

About a stone’s throw away, Becca Brown-Dehner stepped over a twisted bird cage on her family’s property. “This was my twin brother’s room but now that’s all gone,” she said, pointing at a blackened bed frame.

These were the remains of their childhood homes, destroyed on Aug. 18 when the Hennessy Fire flattened the Spanish Flat Mobile Villa, the small Napa County community where North and Brown-Dehner grew up.

As Brown-Dehner surveyed a melted motorcycle, shriveled antiques and seared appliances, the 23-year-old’s eyes filmed over, and her lower lip quivered. North tenderly embraced her. The couple have been dating since high school. For many years, their families not only lived next door to each other, they shared countless game nights, dinner parties and camping trips.

The night of the fire, Brandon and Becca were both on duty as volunteer firefighters.

They don’t have to answer every emergency page, but North, a stalky 25-year-old, makes a habit of it.

“I feel obligated,” he said. “If you’re able to go, you should go. Whether it’s small or big to whoever called, it’s the worst day of their life.”